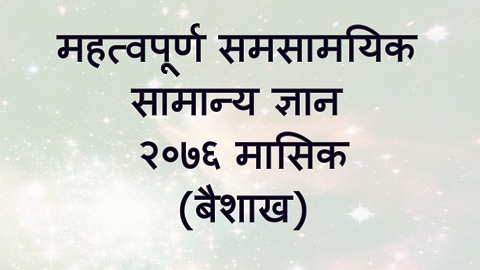 1. When did the government of Nepal launch a health insurance campaign for senior citizens?
– B.S. 2076 Baishak 01
2. Ever since the launch of the open a bank account campaign with the slogan ‘Add a friend, every Nepali bank account’?
– B.S. 2076 Baishak 01
3. Which educational institution is the recipient of a certificate issued by the World Book of Records London on B.S. 2076 Baishak 02?
– Samata School, Kathmandu
4. What is the motto of Student Enrollment Campaign, conducted for Academic Session 2076?
– ‘Our town our village, Reached school for all the children.’
5. As per the statement of the Public Economic and Financial Situation by the Rastriya Bank on 03 Baishak, 2076, What percentage of the trade deficit has increased during the first 8 months of 2075/76?
– 24.5%
6. When was the first time a satellite marked with the national flag of Nepal was launched into space? – Nepalese Satellite – 1, (B.S 2076 Baishak 05)
7. According to Nepal Rastra Bank, the financial and financial situation of the first eight months of the fiscal year 2075/076, how much remittance receving in Nepal?
– Rs 5 Kharb 82 Arab
8. What is the organization that conducts structural adjustment programs related to economic reforms in the backdrop of good governance?
– The World Bank
9. Who is the recipient of the famous Pulitzer Prize on April 2019?
– Capital Garage (US local newspaper)
10. Which is the new Islamic (Syrian) law enforcement nation that recently included the stoning of homosexuals?
– Brunei (2019 April – 03)

11. When will the Lumbini Visit Year 2076 be announced to commemorate the State – 05 Government celebrations with the slogan ‘Go to Lumbini, birthplace of Buddha, spread the message of peace’?
– B.S. 2076 Jetha 04
12. According to the World Happiness Index, 2019, where is Nepal located?
– 100th

13. From which district has the process of distributing farmers identity cards been started in Nepal?
– Baglung

14. When did the Government of Nepal launch a ‘call center’ to hear foreign employment complaints?
– B.S. 2075 Chaitra 18

15. Which is the Commercial Bank of Nepal awarded by Bank of the Year 2018?
– Nepal Investment Bank

16. When is National Information and Communication Day celebrated?
– May 02

17. When was the policy and program for Fiscal Year 2076/077 presented by President Bidhadevi Bhandari at a joint meeting of the assembly of Representatives and the National Assembly?
– B.S. 2076 Baishak (Policy and Program adopted by Parliament on Baishak 24)

20. When was the protocol of the Transport and Transit Agreement signed between Nepal and China? – 29 April 2019

22. When did the government set up a commission under the chairmanship of Mohan Mani Bhattarai, a former Supreme Court judge, to investigation the illegal land all over the country, including the Baluwatar?
– B.S. 2076 Baishak 23

23. When was the agreement to sign a new labor agreement between Nepal and Oman on the issue of taking Nepali workers from Nepal at zero cost?
– 2019 May 05

24. When did the National Identity Card Statement distribution begin in Nepal?
– B.S 2075 Mansir 03

25. Which is the local level for beginners of primary level studying ‘Khas’ languages?
– Tatopani Gaupalika of Jumla (as an additional subject)

27. Who is the winner of the seventh Mr. Himalaya Bodybuilding Competition held on 21 Baishak, 2076?
– Galaxy Fitness, Umesh Rai from Jhapa

29. According to the policy program of fiscal year 2076/77 presented in Baishakh 20, 2076, how many industrial villages are planned to be operational at all local levels?
– Within four years

30. When was the fiery fire at Natredam Cathedral Church, a historic and tourist heritage located in Paris, France?
– April 15, 2019

31. According to the ‘Labor Force Survey – 2019’ released by the Central Statistics Department, what is the unemployment rate of Nepal at present?
– 11.4%

32. With the launch of Nepal’s own satellite space, Where is the construction of ground stations has begun to provide information on various research topics?
– Lalitpur based Nast Building

33. Who is the highest gold medalist in the eighth national sports tournament?
– Gaurika Singh (Swimming Player)

34. Which are the five nations that have been elected as temporary members in the UN Security Council from 1 January, 2019 to 31 December, 2020?
– Belgium, Dominican Republic, Germany, Indonesia and South Africa

35. When was the procedure adopted by the Council of Ministers regarding the operation of ‘Wages for Community Plan’?
– B.S. 2076 Baishakh 22

37. Who is the recipient of the New Late International Award given at B.S. 2076?
– Indian Creator Hymandas Rai Kirat and Dr. Lakhkhidevi Sundas

38. Which is the listed university from Nepal in the list of the best Universities of Public Asia in The Times Higher Education 2019 in the UK?
– Tribhuvan University

39. When did the Inspector General of Police Sarvendra Khanal inaugurate the Central Cyber Bureau building in Votahiti, Kathmandu?
– B.S. 2076 Baishakh 29

40. According to the preliminary results of the first national count-2075, which state has the highest number of commercial establishments? .
– Region no. 03

41. When was the bilateral diplomatic relationship between the African nation Equatorial Guinea and Nepal established?
– May 01, 2019

42. Who is the creator of the award-winning Siddicharan Award – 2019?
– Dr. Dhruvchandra Gautam (Prize money: Rs 1 lakh)

45. Who was honored with the Narayangopal Music Awards announced in Baisakh 2076?
– Artist Ganesh Rasik

46. In the first phase of the government’s pilot project, at what point is it going to connect public transport to the GPS (Global Positioning System) system?
– Kathmandu Valley

48. When is the agreement signed to establish nephew relations between the province of Gensu, China and province no. 3, Nepal ?
– B.S. 2076 Baishakh 30

49. Who was honored with the National Honor of Film Journalism this year by the Film Journalists Association Nepal?
– Shyam Smrit and Naresh Bhattarai